Tom Bilbao, son of Basque immigrants Vicente & Paula Bilbao was born at Jack Creek, NV in 1925. His wife Frances "Frankie" Vicondoa Bilbao and son Jay Bilbao talk about prospecting & mining in northern Elko County and their "Aita", father Tom who was one of the discoverers of different veins along the famous Carlin Trend. Frankie Bilbao talks about her parents Fermin & Madilyn Vicondoa Basque immigrants to Susanville, CA and her move in 1947 to Elko, NV and subsequent marriage to Tom Bilbao. She discusses what it meant to be Basque-American and to be raised in an "Old Country" household.
Jay Bilbao, Tom's son discusses how and where his Dad staked claims and mined independently, his interactions with the big mining companies, contracts and working for and with his Dad. Both interviewees speak of Old Country & New World values and what kind of man Tom Bilbao was and how his legacy lives on. 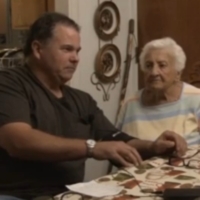 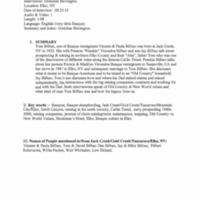