Event sponsered by Nevada Humanities and the Western Folklife Center.

“[It] is a biography of the animal from its evolutionary origins in the American Southwest five million years ago, its role in inspiring the principal deity of many western Indian tribes, to its 21st century spread across North America and colonization of America's largest cities,” said Flores. “Along the way I'll try to explain how its evolutionary adaptations, so similar to ours, has coyotes mirroring our own successes, one of the reasons it continues as an animal avatar for us in modern culture."

Dan Flores is a cultural and environmental historian of the American West. The author of ten books, Flores’ work focuses on a longue durée approach. According to the Western Folklife Center’s website, Flores’s work encompasses “both history and the present so that today’s westerners can strive to make decisions that promote the long-term health of the land.”

Flores has written widely about western animals, including bison and wild horses, and has two forthcoming books to be released in 2016, titled: American Serengenti: The Last Big Animals of the Great Plains, and Coyote America: A Natural and Supernatural History. Flores was also a keynote speaker for this year's National Cowboy Poetry Gathering. 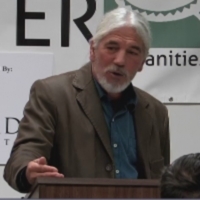