COL Ted Blohm served in WWII, enlisting in the Army in 1944. He returned to Elko in 1946 as a Staff Sergeant. He spent 25 months in the Army, and 18 months overseas.

LT George Winch Sr. served in WWII and the Korean Conflict. His service encompassed service in the Army, Navy and the Fleet Marines.

The featured film of the evening was The Stranger (1946), directed by Orson Wells and starring Orson Wells, Edward G. Robinson, and Loretta Young. The film is in the public domain, and can be viewed here.

VHC Archive Deposit Agreement on file: [administrator access only]
All rights reserved. Use of any content only by express permission of Great Basin College © 2016 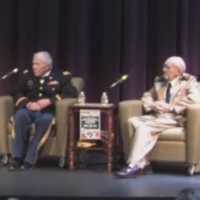