In 1937, 8-year-old Kermit Mirena Iriondo was evacuated from the Basque country following the Nazi bombing of Guernica (Basque: Gernika). Along with his old sister and two brothers, he boarded the SS Habana and sailed for England with 3,840 other Basque children. American First Lady Eleanor Roosevelt led a global effort to support these refugee children financially. During her 1942 visit to Britain, now 13-year-old Kermit met his benefactor and was photographed with the First Lady.

(Originally published in the Elko Daily Free Press, 7 May 2016) 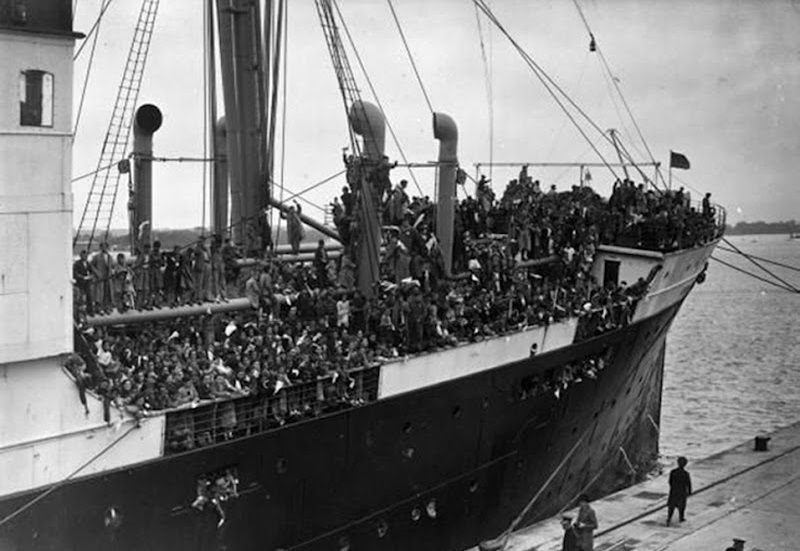 Never had a First Lady of the United States traveled to Europe without her husband. Despite the German Luftwaffe prowling the skies, Eleanor Roosevelt shrugged off the danger and flew to England in 1942. She had four sons in military service and wanted to do something for the war effort, if only to raise British spirits and carry a vital message across the pond, “America is coming.” She and Franklin had been visited by King George and Queen Elizabeth at the White House, so returning the call seemed only fitting. She also hoped to bring good tidings to the few American troops already in country and study the effects of wartime programs on average families. Additionally, a chief priority was spending time with refugee children, three in particular whom she had adopted and supported for years. Among them was a Basque boy, Kerman Mirena Iriondo.

Five years earlier in 1937, Kerman had been swept up in the aftermath of Gernika. In the first aerial assault in world history, Hitler’s Condor Legion dropped bombs for three hours on this center of Basque culture, killing men, women and children, and reducing homes and livestock to ash. Hundreds, if not thousands, died (the number remains disputed), as survivors fled to Bilbao, the last refuge against the indiscriminate onslaught. Fearful of a similar attack, the Basque parents of Bilbao pled with other nations to take their children and keep them safe. England was one of a few nations that answered the call.

Kerman’s mother and father bundled him, then only 8 years old, in a heavy jacket in spite of the warmth of May, and packed food for several days. They pinned a cardboard hexagon to his jacket that included an identification number and the words, “Expedición a Ingleterra,” and then escorted him, his older sister, and two older brothers to the harbor.

There were children everywhere, all clothed in heavy jackets with a pinned hexagon like Kerman’s. Parents hugged and kissed their sons and daughters once, twice then a third time, and loaded them on a boat. No child was older than eighteen, and others were not yet old enough to walk. There were tears, lots of tears, even wails from many children who did not want to leave, and from moms and dads who agonized whether giving up their children was foolhardiness or a supreme act of love.

As the ship raised anchor, Kerman remained stoic. A part of him looked forward to being on a ship at sea. His father had told him stories of the ocean and of men who had sailed to distant lands. It felt very much like an adventure. He waved to his mom and dad, who stood on the dock, and to his four-year-old sister, who wore a sun bonnet and sat in the crook of their father’s arm. It was a scene he’d recall well into old age.

Kerman and his older siblings found a corner of the SS Habana and settled in. The ship had a capacity of 800, but on this day it overflowed with 3,840 children, 80 teachers, 120 helpers, 15 Catholic priests, and two doctors. They covered every inch, slept above and below deck, even in lifeboats, the legs of one child touching the head of another. The choppy waters caused many to wretch until the ship pulled into Southampton port two days later on May 23, 1937. Pale and dizzy from seasickness, Kerman stepped onto English soil with his brothers and sister and never again yearned for the ocean.

Few had noticed these thousands of Basque children fleeing their homeland, but Eleanor Roosevelt had. “I noticed yesterday that the Basque children taken to England were not very happy,” she wrote in her daily column. “It makes me feel more strongly than ever that our own contribution should be in money and these children should be kept as near their own country as possible.”

Her suggestion could not have been more astutely timed. The British government had agreed to accept the refugees but not pay for their upkeep or education. To do so would have violated a non-intervention pact with the Spanish government. Encouraged by Eleanor, a group of citizens formed the Foster Parent Program for these “Tomases, Marias, and Teresas.” The program solicited $15 per month to house, clothe, feed, and educate Basque children.

The children desperately needed the help. Soon after their arrival, Kerman and the other kids were taken to North Stoneham Camp in Eastleigh where rows of white tents stood ready to receive them. Each tent was designed for five but ended up housing 10 to 15, food supplies ran short within a couple of weeks, and septic overflowed. Despite these conditions, the children made the most of the ordeal, dressing in Basque costumes and dancing jotas on Sundays.

The camp at Stoneham proved temporary as children moved into foster homes throughout the country. Kerman and his brothers were separated from their sister and transferred to a convent in Darlington. He found the experience miserable, and it only worsened when, shortly after, he was separated from his brothers too and moved 250 miles south to Barnet, a borough of London. He was 8 years old, alone in a foreign land, separated from parents, brothers and sisters, and living among people he could not understand.

No one can say what Kerman might have felt at this moment, but fair guesses would include isolation, desperation, and profound sadness. But then a kind of other-worldly news reached him. He was told that he had been selected for adoption by a woman in America named Eleanor, and she was the president’s wife. He did not know the full import of the news, or even what the word adoption meant in this context, but he came to know her as the American Queen.

By supporting a Basque child financially, Eleanor wanted to set an example and encourage others to do the same. The motivation succeeded. Housewives across America dug into sugar and flour jars for quarters and dimes that had been squirreled away, churches passed extra collection plates, and schools and civic clubs knocked on doors for nickels and pennies. Her example fired up Hollywood, attracting contributions from Bing Crosby, Fred Allen, Jack Benny, and Helen Hayes.

By the time Eleanor flew to England in 1942, her on-going efforts had inspired multiple programs in several countries, all raising money for Basque children and orphans from World War II. Most of the Basque children had already been repatriated to Spain, although 250 or so remained in England, including Kerman. His parents had died shortly after the Spanish Civil War, so at a young age, he had made a very adult decision to stay in London rather than return to the country of his birth with its terribly painful memories.

He was then 13-years-old and waited anxiously to meet the American Queen who had supported him all these years. He followed her in the London Times which reported her arrival on October 24, 1942, her stay with King George and Queen Elizabeth at Buckingham Palace, her lively conversations with Winston Churchill at 10 Downing Street, her visit to the bombed wreckage of St. Paul’s Cathedral and Nelson’s Tomb, and her review of American soldiers on bases around the country. To think that in a few days he would be in her presence set his heart aflutter. 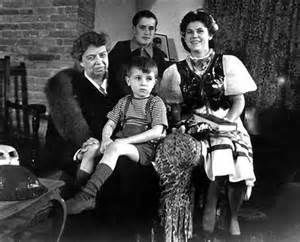 Kerman was a shy, quiet boy, who struggled still with English. It gave him some relief to learn that he would not be meeting the American Queen alone. Two other children whom Eleanor had adopted would be present as well – Janina Dybowska, a 17-year-old Polish girl who had been orphaned after Germany’s invasion in 1939; and Tommy Maloney, a 4-year-old son of a London stoker who had been orphaned during the Blitzkrieg.

When Eleanor entered the warm living room at Hertford Heath, a children’s colony where the three had gathered, she greeted them in a stately black suit with a fur collar. In Kerman’s eyes, she lacked only a crown to finish her regal impression. Had any of the children been nervous, her toothy smile quickly soothed them, and a few toys from her bag drew their smiles. Janina was dressed in a traditional Polish outfit with beads and flowers braided in her dark hair. Little Tommy climbed on Eleanor’s lap as he might a grandmother’s. Not sure what to say or do, Kerman stood stoic, though clean and groomed with slicked-back hair and pressed clothes. Their conversations were not recorded, but the foursome sat for a portrait and seemed at ease in one another’s company. The meeting lasted no more than an hour, yet he would recall the encounter and “Auntie Eleanor,” which she had asked him to call her, until his dying breath.

Eleanor left England two days later. She continued to nurture the Foster Parent Program, and others that had evolved from it, through the war and beyond. With her guidance, several of the programs coalesced after the war into the United Nations International Children’s Emergency Fund, which the world still knows today as UNICEF.

Kerman would not see Auntie Eleanor again, but she continued supporting him until his 18th birthday. During his teen years, he boarded in Carshalton London where he befriended and later married Manolita Abad, another Basque child from the SS Habana. He completed his studies at commercial college and entered the import-export and international banking business. His skills in Basque, Spanish, and English served him well.

The work took him back to Spain for the first time, back to Bilbao and Basque country, back to the memories of an eight year old waving goodbye to a mother and father crying on a dock. There he was welcomed by his little sister, the one in the sun bonnet, who had sat in the crook of their father’s arm.

Please donate to help the young people of the Great Basin Basque Program attend the Smithsonian event this summer. All donations are tax deductible and you will receive a receipt. Go to:
http://www.campusce.net/gbcnv/course/course.aspx?c=246

If you would like to help the young people of the Great Basin Basque Program in other ways, contact Angie deBraga at Great Basin College. angie.debraga@gbcnv.edu. 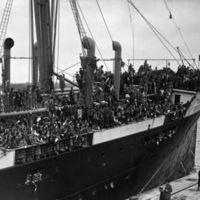