Lester Shaw Jr. was born in Boise, ID and was son to Lester Shaw and Lillian Thomas Shaw.  Lester currently resides on the Duck Valley Reservation where he attended school until 1961 and became president of the FFA and participated in various sports.  During this period he helped out at his dad’s mom’s ranch pushing cattle, branding horses, and putting-up hay.  After he finished High School he worked at Spanish Ranch to save up to attend Haskell Institute in Kansas until he was drafted into the military in 1964.  While serving in the military he was sent to Germany and Vietnam during the war, at which time he received the Bronze star and was inducted into the Military Order of the Purple Heart.  He also spent much of his life learning masonry which he taught to the youth which he advises to keep up their traditions and Native language.

Non-commercial scholarly and educational use only. Not to be reproduced or published without express permission. All rights reserved. Great Basin Indian Archives © 2017.
Consent form on file (administrator access only): http://humanities.gbcnv.edu/omeka/admin/items/show/id/172 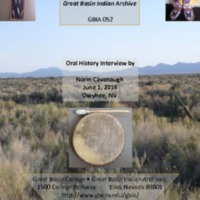