Floyd Collins was born in Ely, NV on August 27, 1937.  His dad was Abe Collins Sr. and his mom was Dellis Maul.  Floyd speaks about living all around Nevada but mostly in Ely, and how he worked different occupations such as BLM, Kennecott mine, and West Tran to name a few.  He also recants about the hunting him and his family take part in, as well as keeping up with traditional crafts such as creating drums and tanning hides.  Floyd joined the U.S. Marine Corp in 1955 which he stayed with for 8 years.  He retired at age 75 but still assist the tribe as needed.  He also speaks about his time playing basketball and softball with the Ely Indian Colony.  He concludes his oral history by suggesting to the younger viewers that they should keep in school and attend college.

Non-commercial scholarly and educational use only. Not to be reproduced or published without express permission. All rights reserved. Great Basin Indian Archives © 2017.
Consent form on file (administrator access only): http://humanities.gbcnv.edu/omeka/admin/items/show/345 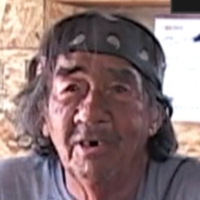 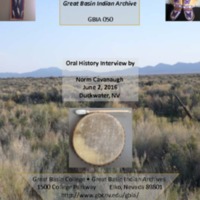