Helen Walker is from Duckwater Reservation near Eureka, NV she had 3 older sisters, 2 brothers, and 1 younger sister.  Her family was originally from the Smoky Valley area then they were given a house by the government and started ranching in Duckwater.  Her father worked the ranch while she helped her mother garden.  She went to Stuart Indian School and learned housekeeping she also lived in a Ranch in Moapa, NV.  Later in life she worked at the Senior Center in Duckwater as a cook and took the elders to powwows and to go pine-nutting.  She also talks about hand games, sweat lodge and Indian doctoring.  She ends by telling us about the Shoshone language class and the young children taking it.

Non-commercial scholarly and educational use only. Not to be reproduced or published without express permission. All rights reserved. Great Basin Indian Archives © 2016.
Consent form on file (administrator access only): http://humanities.gbcnv.edu/omeka/admin/items/show/309 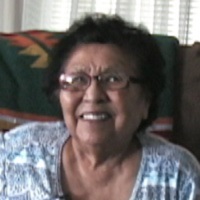 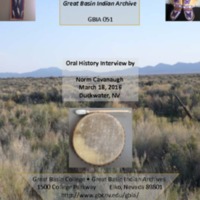