Dan Blossom (Cho Cho Kunn) was born in Battle Mountain (Dona Muzza), Nevada in 1924. His mother was Miley Jackson-Cavanaugh. He is part of the Jackson Clan. Dan Blossom describes how he grew up on the outskirts of Battle Mountain. He describes how he would hunt for food such as gomba (type of desert ground squirrel), and eat other foods such as deer, duck, etc. He describes how his grandmother Aggie Jackson and his family lived while he was growing up in Battle Mountain. Dan also tells us of his school experience, and how he was not allowed to speak Shoshone. He later describes his life while he was in the Army during the Korean War. He later tells us a traditional Shoshone Tale: Coyote and Wolf.

Click for standalone page if above viewer does not work.

Non-commercial scholarly and educational use only. Not to be reproduced or published without express permission. All rights reserved. Great Basin Indian Archives © 2016.
Consent form on file (administrator access only): http://humanities.gbcnv.edu/omeka/admin/items/show/id/308 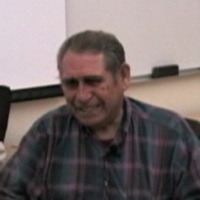