Elizabeth “Liz” Brady was born in Elko, NV between the Elko Smoke Shop and I-80 where the old Elko Senior Citizens Center was located. Her father’s name was Sontag Jackson whose grandparents were from the Austin area and were part of the Dubba Diccada. Her mother was Mary Horton who belonged to the Dosa Wihi near Battle Mountain, NV. Liz talks about how she grew up around ranches while her father ran mustangs. She speaks about her experience going to Battle Mountain for grammar school, and her experience at Stewart Indian School where she was punished for speaking her language. She also speaks about how her grandfather partook in contact with the emigrants and their wagons. She also speaks about growing up in tzsogogotti (Antelope Valley) and how her family was ran out of the area. She also tells the audience about the history of Elko including the start-up of a lot of the old businesses including who ran them. She also speaks about living on the outskirts of Battle Mountain and the diseases impacting the Shoshone there.

Non-commercial scholarly and educational use only. Not to be reproduced or published without express permission. All rights reserved. Great Basin Indian Archives © 2017.
Consent form on file (administrator access only): http://humanities.gbcnv.edu/omeka/admin/items/show/356 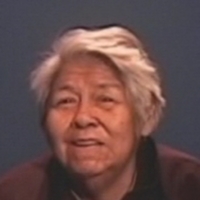 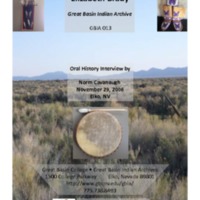