Johnny Bobb is a Western Shoshone from the Yomba reservation. He was born near Austin, Nevada and was raised by his grandma and grandpa. Johnny tells us of his up-bringing and how his grandparents were concerned with traditional practices being passed on. He explains how most of his relatives came from Smoky Valley, Monitor Valley, and Little Antelope Valley. Johnny describes how he learned to pick medicines for ceremonies and how they work together with prayer. He goes on to speak about Indian Health Services, the 1863 Ruby Valley Treaty, and the Nevada (Nuclear) Test Site down in Yucca, NV. Johnny also tells us about the pioneers coming through the Shoshone’s ancestral territories and how contact occurred. He goes on to speak about the importance of tradition, the water, the Shoshone language, and ceremonies and how they need to be carried on by younger generations.

Non-commercial scholarly and educational use only. Not to be reproduced or published without express permission. All rights reserved. Great Basin Indian Archives © 2017.
Consent form on file (administrator access only): http://humanities.gbcnv.edu/omeka/admin/files/show/487 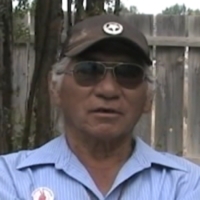 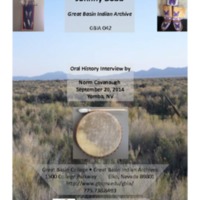