The play Twelve, explaining the origin of the months and seasons, is based on a traditional Shoshone story as told by Norm Cavanaugh.  The play was created and performed by SYLAP participants during the summer of 2014 at the Natural History Museum of Utah. Directed by Sloan Sampson. In this video, the play performance is enhanced with interviews about the story and the process of bringing it to life.

In Western Shoshoni with English subtitles and commentary.

Video courtesy of the the University of Utah Shoshoni Language Project.

© 2016 The University of Utah. Video used with explicit permission [MoU on file].

English subtitles available in video; no other transcription. 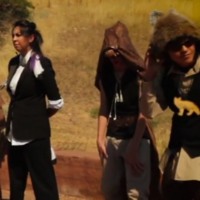