Clara Woodson (Battle Mountain, NV) and Gracie Begay (Austin, NV), both Western Shoshone, explain their early lives, what life was like when they were younger, and different parts of their family background. They both talk about different stories including the Coyote playing Hand Game, Shoshoni beliefs on death, and one of their elders Maggie, who had the power to turn into a wolf. Clara describes her frustrations with the government and tells how they never received proper compensation for what was taken from the Western Shoshone. Interviewed by Joe Ducette, 16 March 2006
View Oral History [streaming video]
View Transcript [pdf file]

English transcript with some Shoshone transcriptions available as pdf file 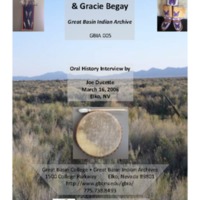 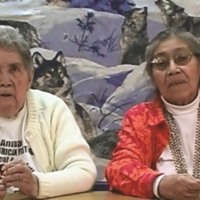