Oral history interview with Lorraine and Alvin Sims, members of the Duck Valley (Sho-Pai) tribe on 11/30/2009

Lorrain and Alvin Sims are both members of the Duck Valley Sho-Pai tribe. Alvin speaks first about his parents Edna Charles and Jack Sims and where they came from before moving to the Duck Valley reservation. He also spoke about how his father worked for the Conservation Corps. Moreover he speaks about his relative Captain Sam and how Duck Valley became a reservation. Both Alvin and Lorrain talk about the usage of traditional medicines, and the medicine/spiritual leaders who were traditional doctors within the tribe. Lorrain also speaks about the traditions surrounding right-of-passage and pregnancy. They both recall the traditional way that sweat lodges were also used. They also tell us about how items such as sugar, clothes, and food were rationed when they were younger. They end by cautioning the youth to keep away from drugs and alcohol.

Non-commercial scholarly and educational use only. Not to be reproduced or published without express permission. All rights reserved. Great Basin Indian Archives © 2017.
Consent form on file (administrator access only): http://humanities.gbcnv.edu/omeka/admin/items/show/id/371 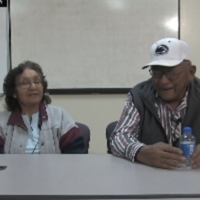 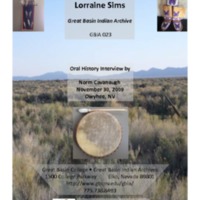